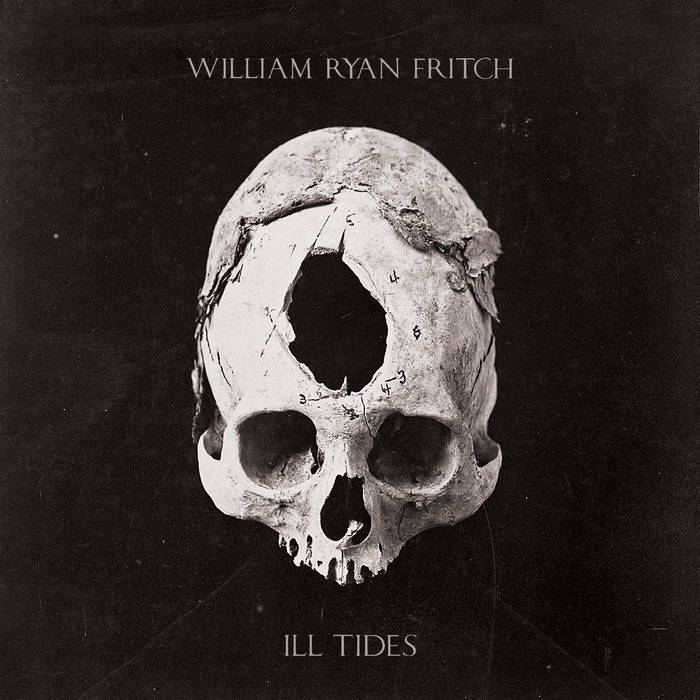 uzzielV I love this album, it takes me to another place and gets me through my college assignments.

Yumi Koike it's like travelling another world alone with nostalgia !! Favorite track: Evaporate.

Michael Wildman A really unique voice. This album can take small voices and piece them in a grand place. WRF knows how to sweetly and sadly drag us along at exactly the right speed. He knows the balance of strength and gentleness. Mature and grand pieces Favorite track: Furthest Shore.

Composer and songwriter William Ryan Fritch has created an enormous and diversely inspired catalog of music in his ten year career; it leaves many to wonder does the man even sleep, and how is this much creativity still pouring out of him. On October 21, 2016, Lost Tribe Sound releases ‘Ill Tides’; Fritch’s 14th full-length album under his own name. The album is available digitally and physically as part of LTS’s new series Dead West, a series of limited cassette tape editions.

For some, the make-up of ‘Ill Tides’ will beg comparison to his 2013 soundtrack for the Oscar nominated film ’The Waiting Room’, or last year’s ‘Music For Film Vol I.’. Such examples do provide good context, but may sell this new material short. Whereas most film music requires delivering concise, mood setting pieces, ‘Ill Tides’ was not created for any particular film. Fritch's aim for each song on ‘Ill Tides' was to be just that, a fully realized song, not bound by the time constraints and half finished narratives of commercial work.

‘Ill Tides’ pours like a smokey, velveted glass of whiskey for the ears. Ten richly textured songs form the bedrock of the album, with Fritch opting for a minimal and purely instrumental sonic palette made up of soaring mournful strings, rolling harp melodies, waterlogged drum lines, and hazy waves of tape distortion. The overtly oceanic theme of ‘Ill Tides’ could either suggest these songs do indeed tell the tale of some journey across the black seas and sun-drenched coastlines, or simply be a reference to the distinct ebb and flow of the album's architecture. As with most of Fritch’s storytelling; one absolute interpretation is never the intended answer.

Rest assured, this is no neo-classical snooze fest. It holds it’s own against any of the best experimental rock albums out there. As for us at Lost Tribe Sound, this is music that we live and die for, set in a timbre that makes our heart beat wildly . ‘Ill Tides’ is a rugged, hand built vessel but make no bones about it, she’s seaworthy.

Dead West is a new series of limited cassette tape releases from the Lost Tribe Sound record label, inspired by the recent relocation of the LTS headquarters from the dry desert of Arizona to the lowland plains of Wisconsin’s farm country. The Dead West focuses on music built for exploring and soundtracking your environment, whether you're deep in the middle of lush woodlands, or just laying back at home with rested eyes. The first two releases in the series come from the wildly prolific composer William Ryan Fritch and experimental guitarist Seabuckthorn. Both albums share a certain kinship, Seabuckthorn’s ‘I Could See The Smoke’ seems to traverse more inland from dense forests to sunbaked prairies, while Fritch’s ‘Ill Tides’ navigates through rough seas and expansive coastal regions.

The interesting choice of cassette tapes for this series is a first for Lost Tribe Sound, but it felt like the right choice for a few reasons. First off, the warped, dusted nature of cassette tapes pairs well with the music at hand. Secondly, the short production time for tapes allows us get the music out to fans while we are still highly excited about it, something that’s just not possible with the lengthy vinyl process. And finally, Dead West allows LTS to explore some more unusual sonic territory deserving of a physical format, that would’ve otherwise been too costly for our more extravagant release methods.

BEST ALBUMS OF 2016 - "It takes a lot to get me in the right place for modern or contemporary classical music, but William Ryan Fritch carries me far away into a place where only this music matters and, really, isn’t that the point of it all?" - HAYDON SPENCELEY

TOP 10 ELECTRONIC ALBUMS OF 2016 - "There were many, many wonderful ambient releases in 2016, but this one stands out. Serene and patient, but with a hard edge that allows the melodies to linger in your consciousness and filter the color of your day, leaving you a tad more thoughtful, a tad melancholy, but mostly, there’s a feeling of hope, of salvation in beauty and art." - SONGS TO DANCE TO

"There’s a morbidity; a constant dread and pining in his work, at odds with his bright life on earth. William Ryan Fritch specializes in making soundtracks for the end of the world." - THE BAY BRIDGED

"Ill Tides is a return to the purely instrumental for William Ryan Fritch, and we couldn’t be happier. Fritch is one of a small handful of artists with a signature sound, ~ a huge swell of strings bursting from a thick, emotive backdrop, accompanied by slow drums crashing on the sonic shore." - A CLOSER LISTEN

"8/10 STARS - Just beautiful, folks: this record is swelling with its local environment and consumed by what’s to come, mixing hints of songwriting with faraway drone ‘til your stomach is nothing but the butterflies. Be afraid, but love it." - NORMAN RECORDS

"When an artist produces such a wealth of material in a relatively short time, listeners can begin to take the work for granted and the appreciation for it diminishes; yet while that might generally be the case, Ill Tides serves as a powerful reminder of Fritch's remarkable gifts." - TEXTURA

"Ill Tides heralds the start of a fascinating series, reiterating how fruitful the inspiration that enabled William Ryan Fritch to reach his fourteenth disc in just over ten years of career." - SOWHAT MUSICA (translated from Italian)

"William Ryan Fritch makes music that’s more a work of art than something to nod your head to on the radio, his medium not paint or clay but those airborne vibrations we call sound." - WAKE THE DEAF