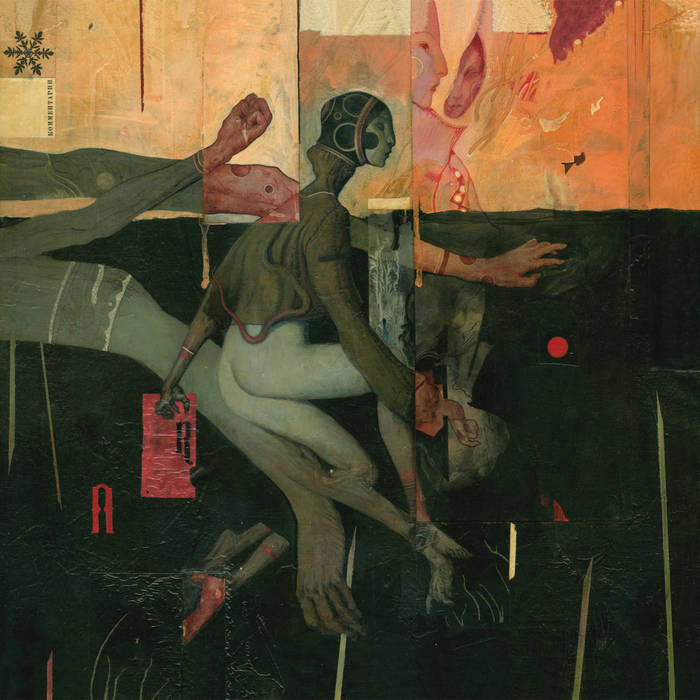 roland's untergrund.city outstanding. intense. inspiring. monumental.
one of the most exeptional songwirters I know, ignoring any genre barriers for the sake of great, great music.
Favorite track: Thankless Deeds.

Mubla Na Thguob Music just doesn't get better than this. I wrote and rewrote my review several times before giving up and deciding to go with the suggestion that you 'just listen'. Favorite track: Unholy Frames (Feat. Origamibiro).

wonderdog A full, luscious album. The voice is reminiscent of Johnathan Meiburg (he of Shearwater) and the overall effect is one of perfect harmony.

Jeremy / HI54LOFI It's crazy how much amazingness this guy manages to keep knocking out. I'm starting to think he is some kind of musical Terminator sent from the future. Favorite track: Heavy.

'Revisionist', from composer William Ryan Fritch (Vieo Abiungo), brings an emphatic close to his incredibly prolific 2014. Mere months after the release of Death Blues 'Ensemble'—his powerhouse collaboration with drummer and new music ringleader Jon Mueller—Fritch has produced his most focused and dynamic work yet. Energized by the collaboration with Mueller (Volcano Choir), the otherwise self-sufficient multi-instrumentalist surrendered his auterist sensibilities, seeking creative alliances with Benoit Pioulard, D.M. Stith, Origamibiro and Esme Patterson. The results are scintillating. From the elegant minimalism of “Winds” (produced by Pioulard) or the exultant vocals of “Gloaming Light” (performed by D.M. Stith), these inspired partnerships take Fritch’s instrumentation and craft to new destinations, employ new techniques, and further it’s immediacy and appeal.

Fritch writes, “Our physical laws do not in fact generate anything. They serve only to describe regularities and consistent relationships in nature. I embrace the notion of there being no immutable truth, that in its absence is an endlessly nuanced and novel experiential universe which—by eclipsing our feeble processing—leaves us innervated, enthusiastic of our unknowing.” This echoes the aching shimmer of “Impostors,” in which he sings: “To hear the sounds that you thought to be true, twisted and out of tune/ you must force your heart and nerve and sinew to serve you long after they are gone.” Those of us who know Fritch from his explosive instrumental music will be startled by his fragile, supple voice, which glides and undulates over the compositions with melodious confidence, adding another compelling dimension to his ornate sound world.

He continues, “The record explores the psychology of revisionism: how we forget evil, distort it, skim past it, papering over those aspects of history we find uncomfortable.” This way the tense, physical, and oxidized “Infant Sight” lands like a blow to the gut: “Can I forget all these burns? Oh to see again with infant eyes, to revel in such virgin sights/ I am too tired to start looking again.” Fritch has gradually made a name for himself through his peerless ability to build strange, looming musical architecture, seemingly the Babel project of a dozen artists and processes, but indeed nothing more than the sound of one expert journeyman and his live acoustic instrumentation. His kaleidoscopic array of layered sound is still foremost, but now more than ever his savant’s orchestration serves the song structure, not the reverse.

The artwork adorning Revisionist’s deluxe vinyl art booklet is the work of celebrated Brazilian artist João Raus. His work Arachne depicts the Greco Roman myth of a great weaver who insulted and bested Athena with her great skill, only to have her work torn to shreds and be condemned to live out her days ever-weaving as a spider. Ruas’s work itself is ripped into ribbons and collaged into arresting imagery that beautifully complements and enhances the album’s unique musical amalgam.

Accompanying 'Revisionist' are two contrasting EPs that serve as illuminating appendices to its aural aesthetic. 'Heavy' and 'Empty' are raw and unfiltered explorations of the distinct contrasting elements at play in the LP. 'Heavy' showcases a dense and propulsive maximalism that marked so many of Fritch’s early recordings as Vieo Abiungo, but realized with the evocative production and ruddy, unkempt western sound pallet of his most recent work. While 'Empty' is a work of patience and restraint, a look forward in many ways to the expressive and dynamic power uncovered by simplifying and paring down his ambitious, large scale works. Together these recordings are a formidable display of craft and skill from a composer no longer stymied by his expansive range, but empowered by it.

"Once you’re in, you’re in deep — it’s a hallucinatory experience, bursting with colour and immediacy" - FLUID RADIO

9/10 Stars - "A rare feat of immersive, affecting and explorative sounds and concepts, Revisionist is a bold, pioneering effort to be cherished and championed." - EXCLAIM

"BEST COVER ART OF 2015 - Despite its subject matter, the album doesn’t come across as a United Nations summit. Instead, the music echoes with the weight of prophecy." - A CLOSER LISTEN

"This is complex lyrical music. It’s bombastic without being overbearing, and there’s a vulnerability and innocence here that is nothing short of breathtaking. His ability to sew these contradictory elements together is the real key to this album. It really does feel like something definitive." - CYCLIC DEFROST

"Revisionist is to a large degree a song-based album that naturally situates Fritch's distinctive voice, an ear-catching instrument that undulates in tandem with the slow, dream-like flow of the music, at the forefront." - TEXTURA

"The album travels great distances in the span of its 10 tracks (often even in just one song), transitioning from finger-picked acoustic guitars and haunting choruses to echoing snares and fluttering string orchestras." - DIFFUSER FM

"This is the free-gan style of modern-baroque-classic that all DIY orchestral auteurs and musicians should take note of." - IMPOSE MAGAZINE

"There’s an impossibly gripping aesthetic to this..., a feeling that goes far beyond your headphones, your building, even the city that you’re in." - ART INFO﻿